In late December 2014, I met up with Dr Ian Baird one of Australia’s foremost experts on Giant Dragonflies and we spent the day together wandering selected swamps of the Blue Mountains hunting this rare and elusive species. This was an eye opener for me and I had a fantastic day learning all about Giant Dragonflies. The following information on the species was provided by Ian.

Petalura gigantea, commonly known as the Giant Dragonfly or Southeastern Petaltail is a very large dragonfly which may have a wingspan up to 13 cm. It is recorded from selected peat swamps, bogs and seepages (mires) along the coast and ranges of NSW from Nadgee Nature Reserve near the Victorian border, to near the Qld border in and around Basket Swamp National Park and Boonoo Boonoo State Forest. It has also been observed in nearby Girraween National Park in southeastern Qld.

It has been recorded in swamp habitats from near sea level to 1240 m elevation. Listed as endangered in NSW under the NSW Threatened Species Conservation Act 1995, with habitat loss and degradation identified as the main threats to the species. 1. A dragonfly perching in the swamp

2. Closer up perching on a stick

The family is unique amongst dragonflies, in that larvae excavate burrows which extend below the water table in soft peaty soils in mires, seepages or along stream margins. The larvae (mudeyes) occupy and maintain these burrows for their entire larval period, generally surviving on creatures captured within the burrow system, or perhaps ambushed at the burrow entrance. Larvae may leave their burrows to hunt under favorable conditions, but this behaviour has not been confirmed. Petalurid dragonflies have very long larval stages, which are known to extend for at least five years in two overseas species. Extrapolation from recent studies by Ian and Dr John Trueman, suggest, respectively, a larval stage of at least six years, and possibly 10 or more, in P. gigantea. Ian was extremely skilled at locating burrows and he found 10:1 to what I did. I was desperately searching for an occupied burrow but only ever found those recently vacated. After this extended larval stage they emerge (October-January) and climb the nearest shrub or sedgeland vegetation to undergo emergence, usually leaving their larval skin (exuvia) attached to their shrub or sedge emergence supports. Ian and I surveyed the Katoomba swamp and I was astounded at the number of exuvia we found amongst the sedges. Ian indicated that this was an unusually large emergence event for this swamp patch. 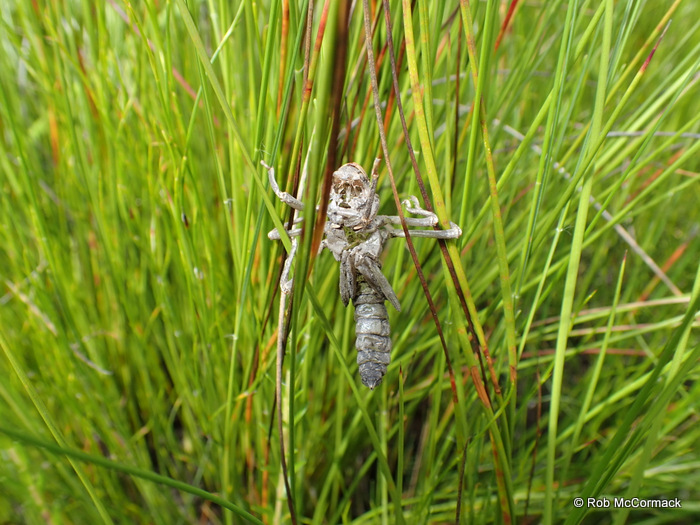 The larva emerge from burrow, climb up and emerge from exuvia to become adult dragonflies

Exuvia from a male dragonfly larvae

Adults live for a maximum of one summer flying season, which extends into February at least, with occasional late flying individuals having been observed on one occasion as late as mid-March in the Blue Mountains. My thanks to Ian for a most enjoyable and informative day. I’ll certainly be keeping an eye out for Giant Dragonflies in the future.

Tillyard, R.J. (1909). Studies in the life-histories of Australian Odonata. 1. The life-history of Petalura gigantea Leach. Proceedings of the Linnean Society of NSW, 34, 256-267.

Tillyard, R.J. (1911). Studies in the life-histories of Australian Odonata. 4. Further notes on the life-history of Petalura gigantea Leach. Proceedings of the Linnean Society of NSW, 36, 86-96.