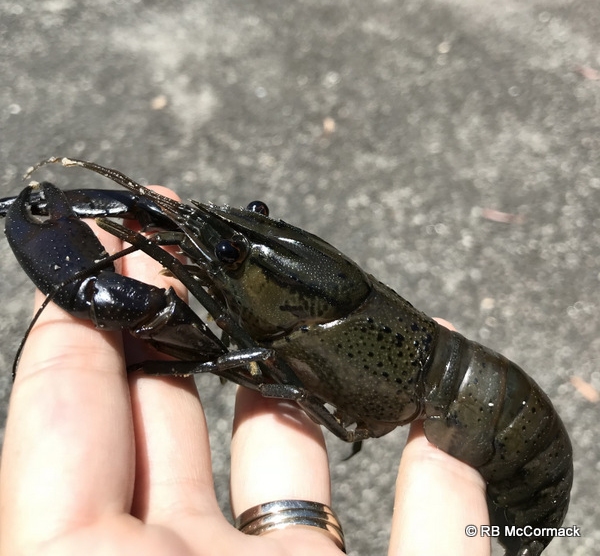 Freshwater blood and fluid sucking leeches can pose a serious problem for freshwater crayfish. Typically it’s the common yabby (Cherax destructor) that you find leeches attached to or they have a nasty round scar indicating a leech has had a feed. The scar remains until the crayfish moults but the scar itself can create difficulty in moulting and can lead to the death of the crayfish. From an aquaculture perspective, leeches in your ponds are a big NO-NO and every effort should be made to catch and remove them as the unsightly scars on crayfish make them unsellable. 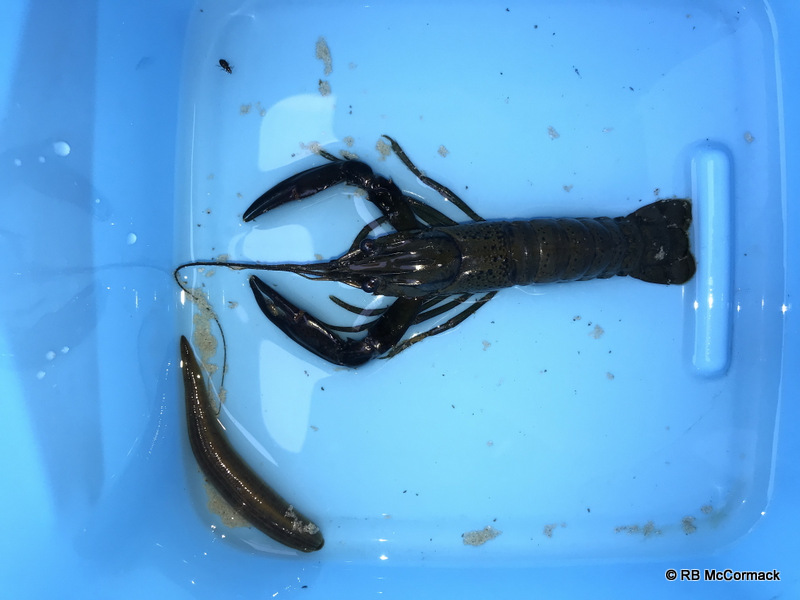 The Marron and its leech attacker

Most leeches can ingest several times their own weight in blood at one feeding and swell to a large fat size. Leeches attach to their hosts and remain there until they become full, at which point they disengage and fall off to digest their huge feed. Crayfish are most vulnerable when they are freshly moulted. Freshly moulted crayfish are already stressed out and weakened by the moult process, the additional blood loss from a leech feeding could be fatal. This risk of mortality is greatly increased if the crayfish is small and the leach large.

The example Marron with a leech attached was found in the swimming hole below North Dandalup Dam, WA. 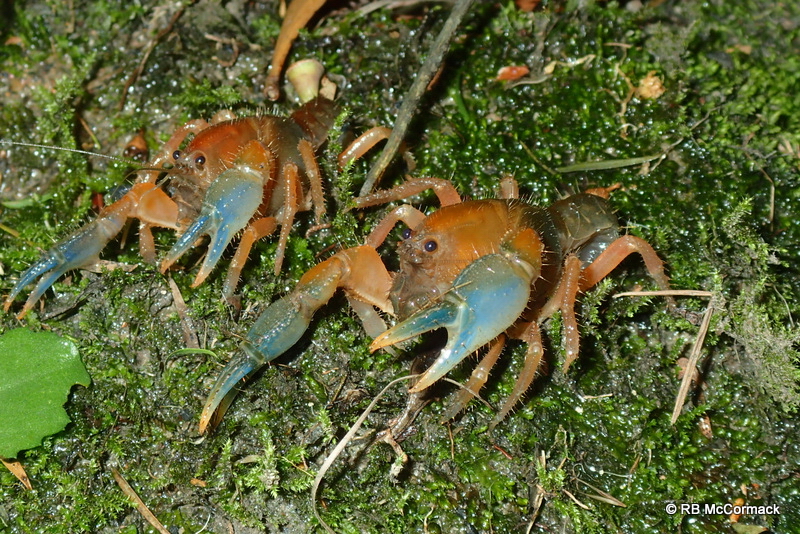 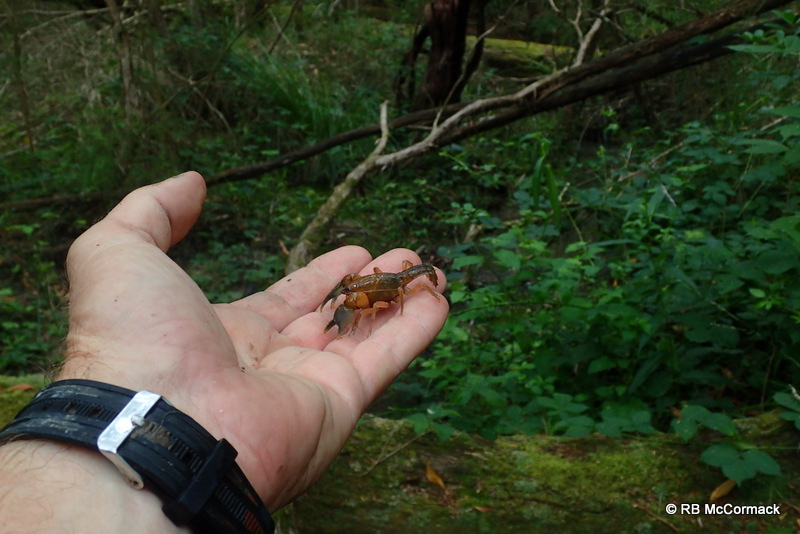 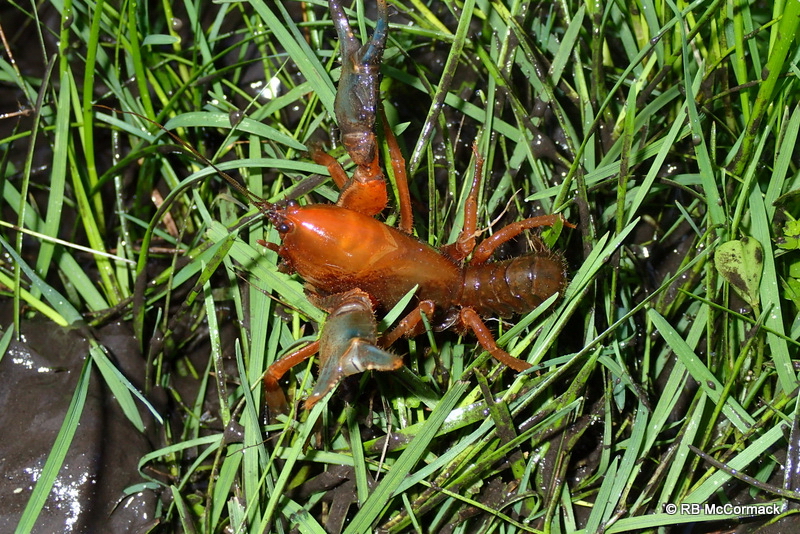 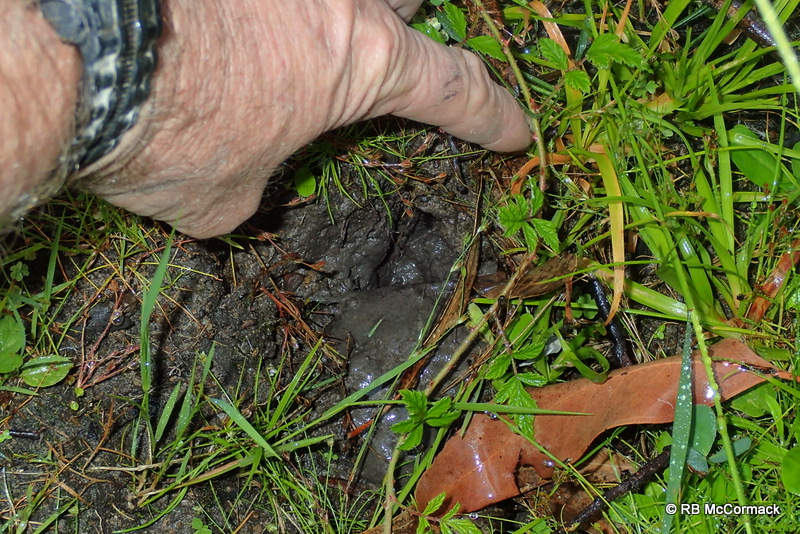 An expedition to Victoria –November 2015

I had the pleasure of traveling to Victoria to present a lecture on “The Freshwater Crayfish of Victoria” to the Bendigo Field Naturalists Club. They were great crowd and I had a great time chatting with them. 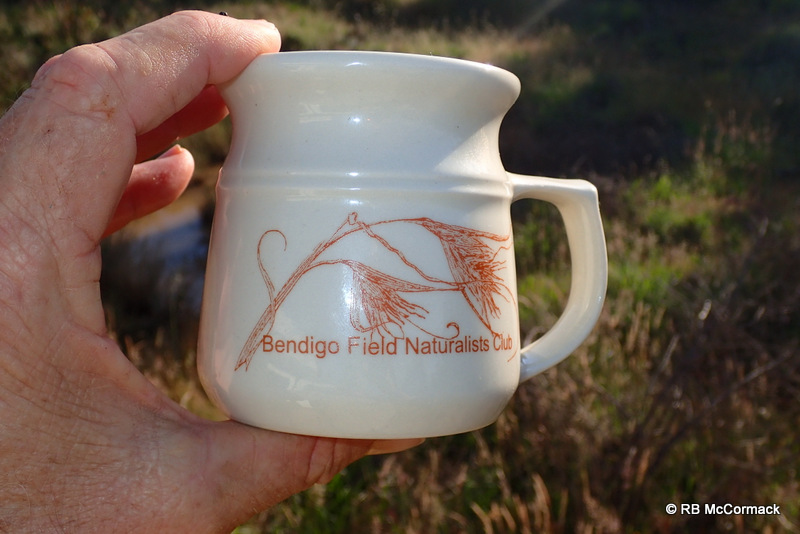 Whilst in the Bendigo area I sampled the local creeks and streams, only finding yabbies Cherax destructor. 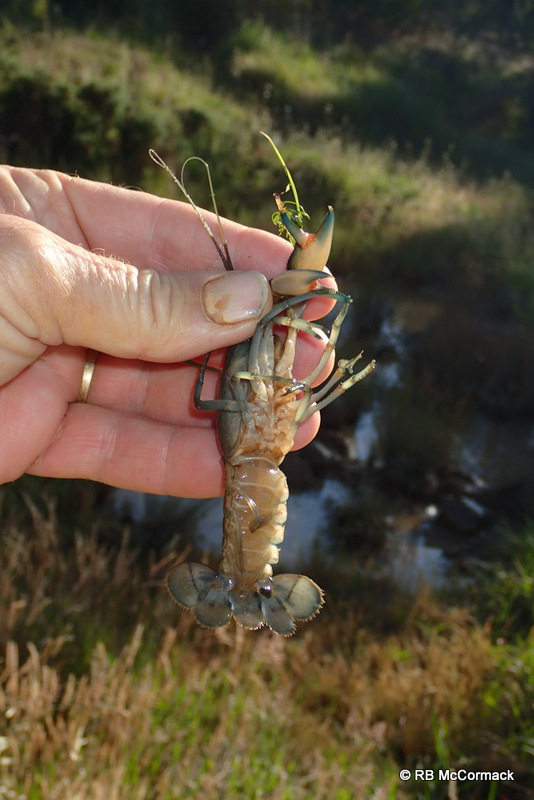 The following day I had an aquaculture consult in the Seymour area and whilst there I took the opportunity to sample the local creeks and streams. Again abundant Cherax destructor but then a very nice surprise. I found a colony of Engaeus lyelli. This was excellent as I also managed to capture berried females, something I haven’t come across in this species before.
For a full article on Engaeus lyelli “Click Here” 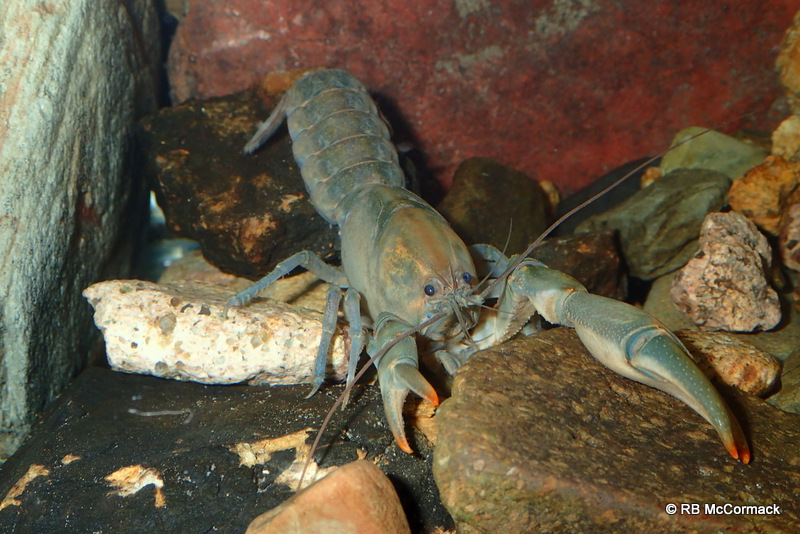 Travelling south to the Otways the following day I sampled creeks, streams and rivers, finding mostly Cherax destructor and glass shrimp Paratya australiensis. One nice surprise in the Campaspe River were Australian Basket Shell Mussels Corbicula australis. They are a widespread and common species but usually hard to find so finding them easily was a pleasing result. 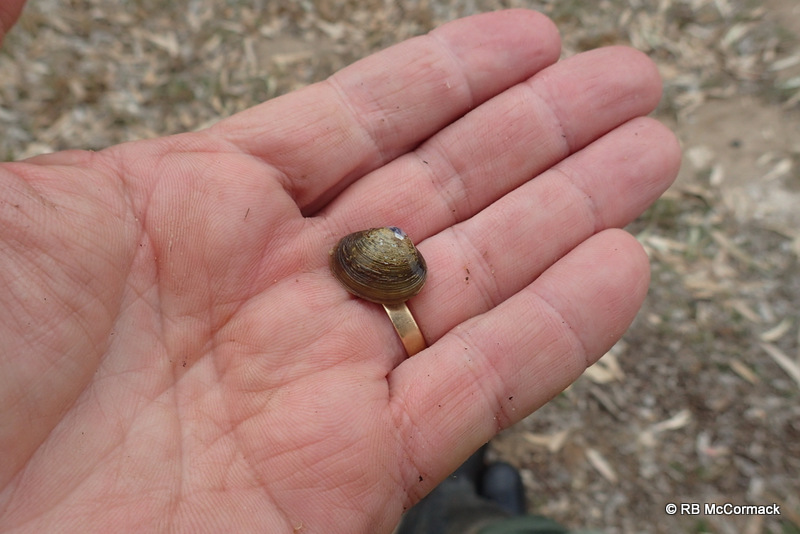 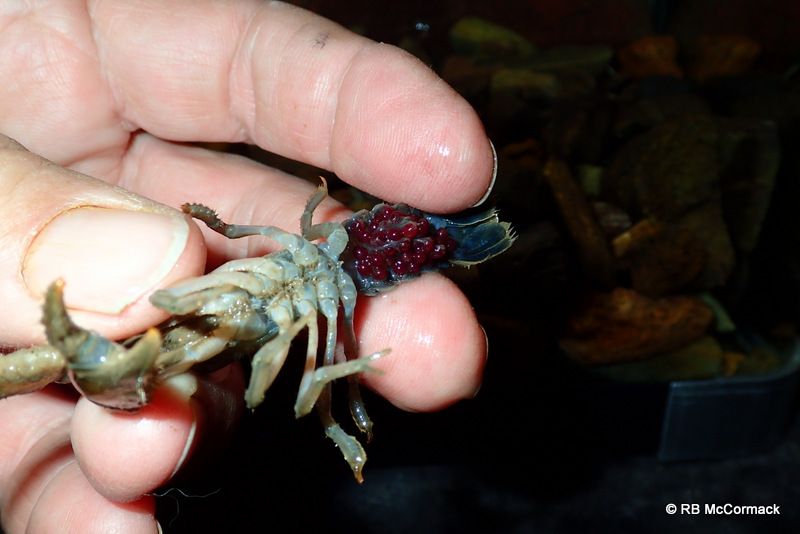 I spent several days at Otway Crays, Bellbrae, Victoria with the owner Steve Chara. Steve is a mate and we spent a few days together surveying the general area. Mostly we were finding Cherax albidus and Geochara gracilis. Both species were abundant and we found thousands. For a full article on Geocharax gracilis “Click Here”. 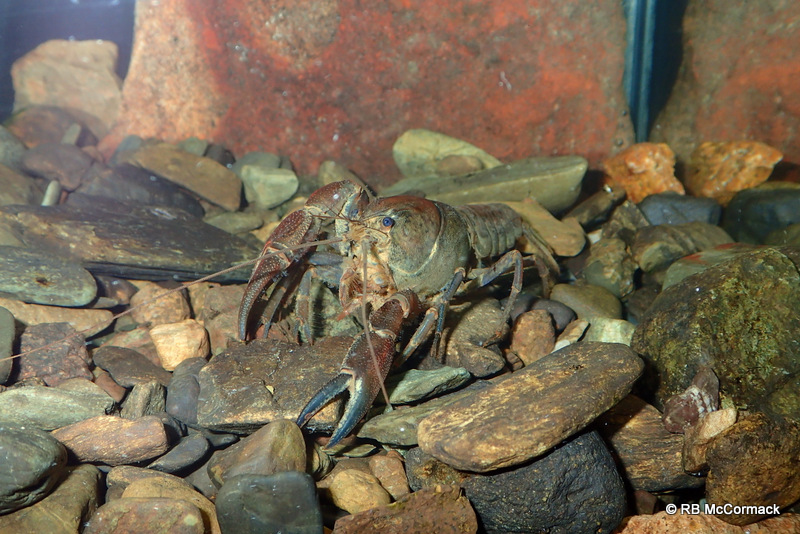 We also found Engaeus sericatus at a number of sites. 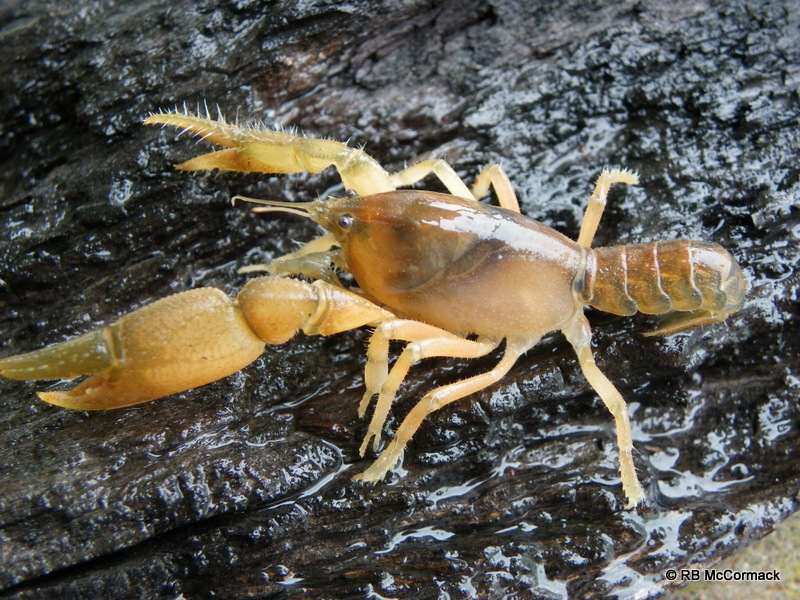 Steve Chara is one of Victoria’s largest yabby farmers and I spent some time with him sorting, grading and packaging yabbies. 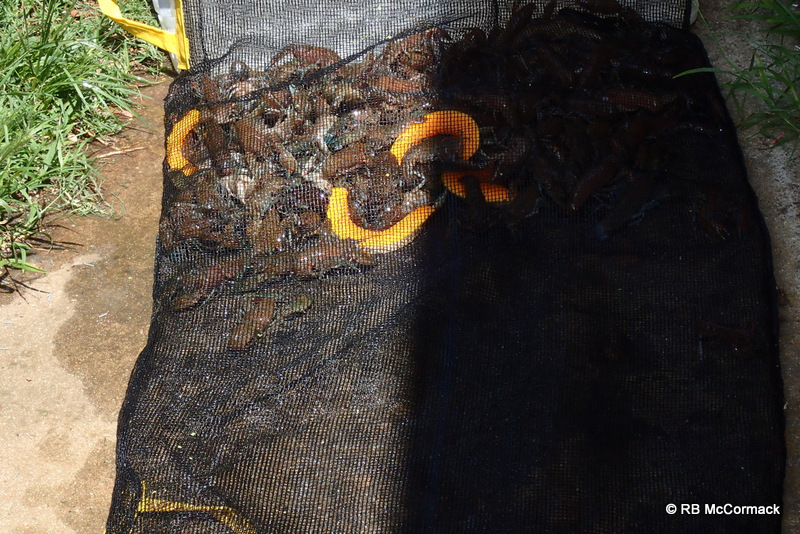 Cherax albidus in a holding net 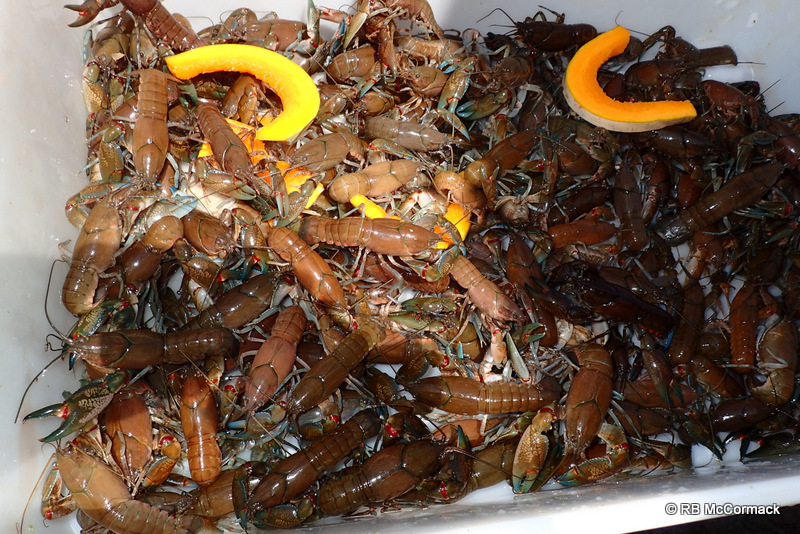 Steve had a bi-coloured yabby in a tank, this is a rare treat as these are extremely rare animals. For an article on Bi-Coloured Crayfish “Click Here”. 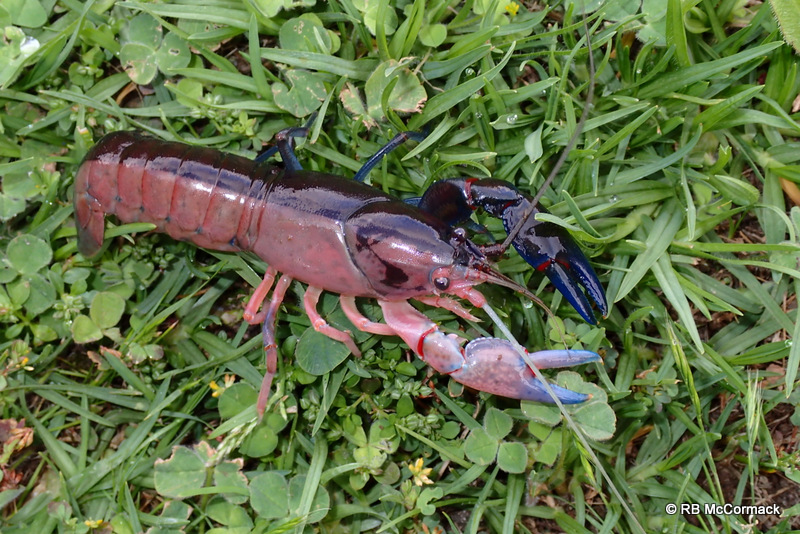 Unfortunately the expedition was over all too soon and I had to head back to the office. 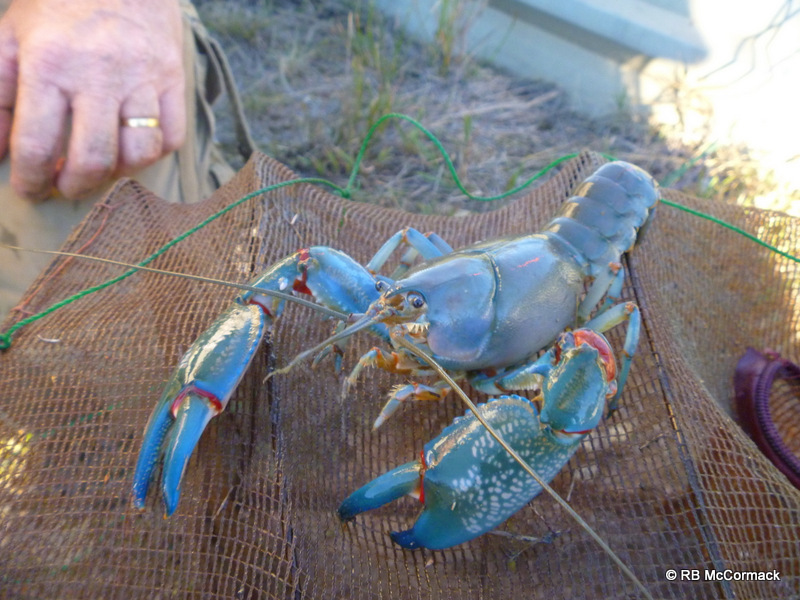 NSW Aquaculture Association in partnership with “Yabby Dabba Doo” Yabby Farm and Aquatic Engineering Australia is holding a yabby farming field day on Saturday the 8th August, 2015. Everyone is invited to share in this education and information day.

The days theme, is the commercial aquaculture of yabbies (Cherax destructor) in purpose built earthen yabby ponds. Join us around the ponds to see how they are constructed to suit the yabbies requirements for maximum production. These are not farm dams but commercial yabby ponds. See how to construct commercial earthen ponds, control their overflows and make the ponds gravity drainable at minimal cost. 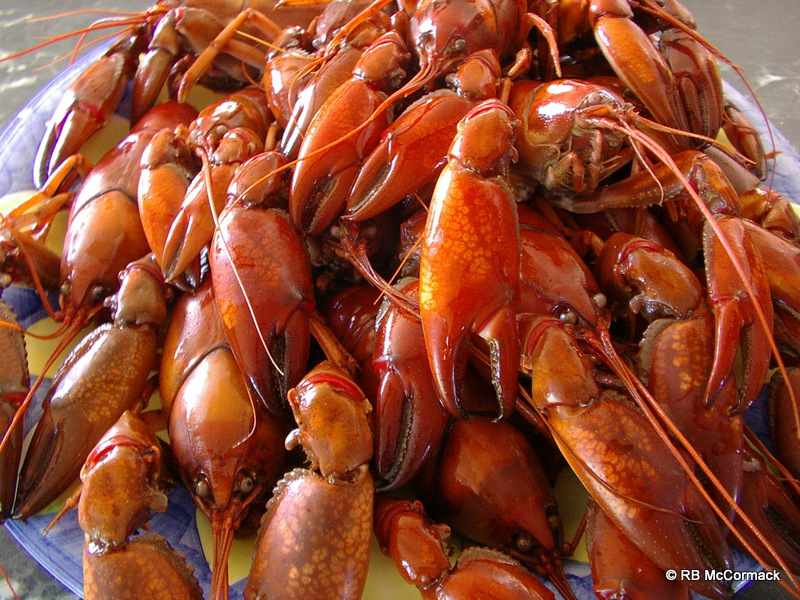 Once yabbies are captured they need to be held ready for sale. You need somewhere to store yabbies for a week or two ready for sale and be able to purge the yabbies on demand. See a simple commercial purging recirculating aquaculture system in operation; see how it’s constructed and how you can build yours at home. Discuss the pros and cons of this basic construction with Paul Van der Werf, one of Australia’s leading experts on recirculating aquaculture systems. 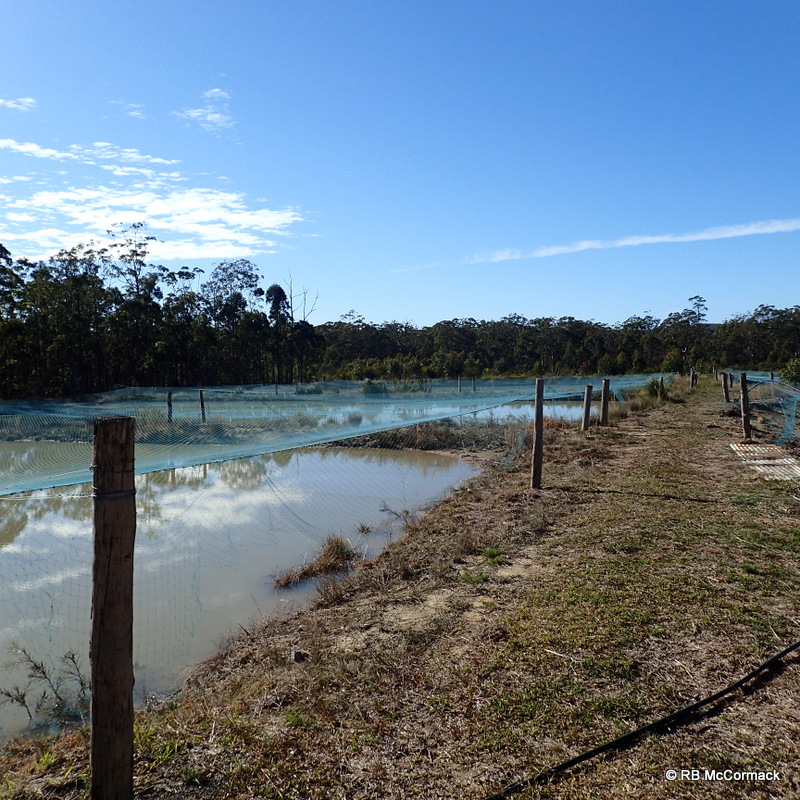 When you start growing commercial quantities of yabbies at densities far greater than that which occurs naturally in nature then perimeter fencing of your ponds becomes an important priority. Commercial yabby ponds need external perimeter fencing to ensure yabbies don’t wander from the ponds and to keep predators like turtles and eels from getting into the ponds. Join us to see the fencing and discuss the options and requirements.

One of the major predators of yabbies are birds. The main culprits are cormorants or shags which can devastate commercial yabby ponds. The easiest remedy is to net your ponds. Join us on the day around the ponds to see the bird netting erected over the ponds. See how it’s erected, and discuss alternatives with the experts.

First thing in the morning we will be setting traps in the ponds. We will be using a variety of traps from those used by recreational fishers to the special traps only used by commercial farmers. The traps will range in size from the small box traps for catching small bait yabbies to the large super traps for catching bulk loads of 20-50 kgs/trap. Later in the day we will harvest the yabbies from the traps. See how it’s done and what you can catch in the different traps. 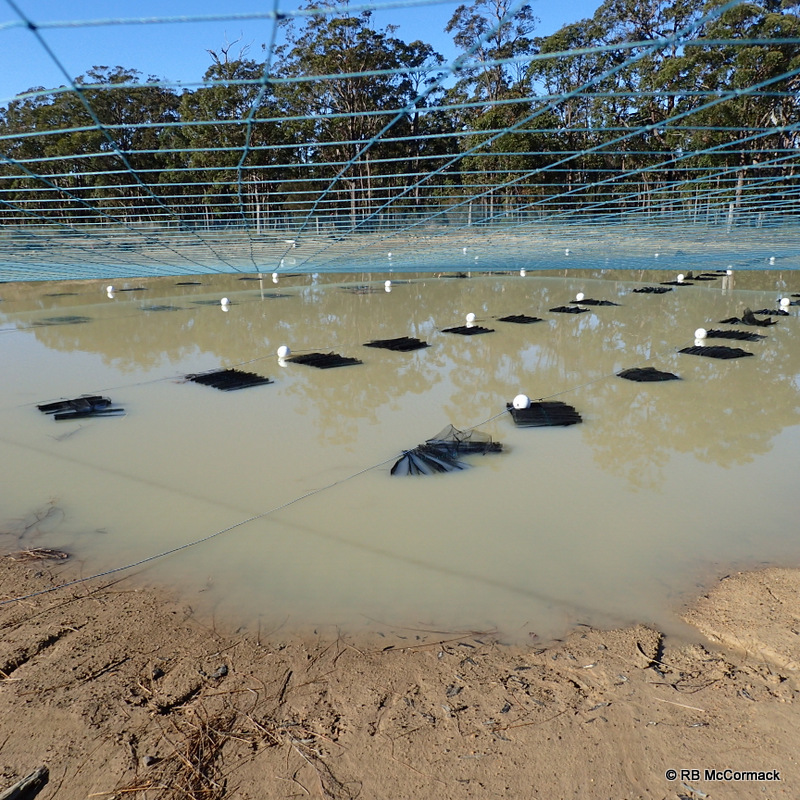 For commercially viable yabby production you need to add shelter to the ponds. Yabbies only use the floor of the pond which limits the number of yabbies which can physically survive in the pond. If you add shelter to the pond you can double, triple or quadruple the production from that pond. Join us to see the types of shelters used and how they are set for easy removal from the ponds and additionally used for juvenile harvesting etc. 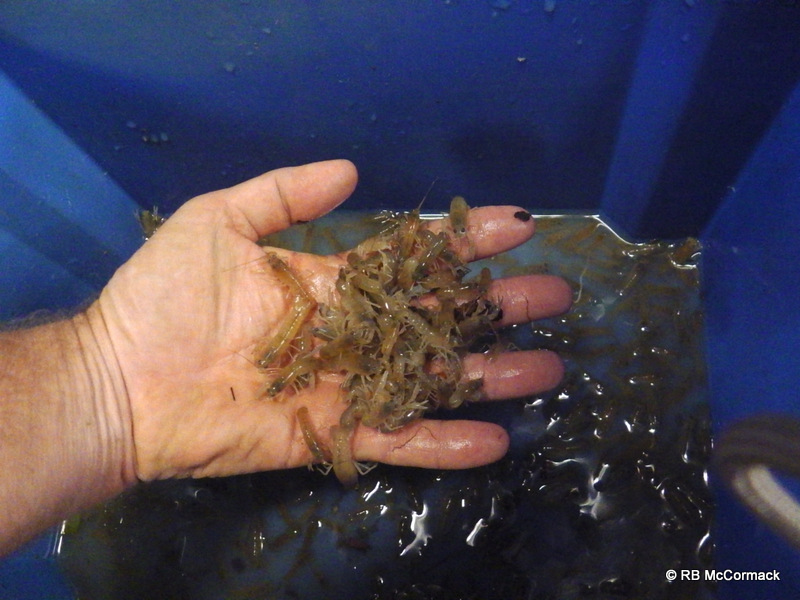 A clean reliable water supply is an essential requirement for any commercial aquaculture facility. Aquatic Engineering Australia will be demonstrating their “Ultra Filtration Mobile Unit”. Join us to see the unit in operation with demonstration of its sediment removal capability. See how this demonstration unit can turn turbid dam water into clear, clean water.

Our Aquaculture Policy Officer from Fisheries NSW will be there to discuss the government requirements in getting started. Find out all you need to know and it’s a great opportunity make contact with the man you will need to lodge your application with.

This is a great opportunity to meet with some of Australia’s leading industry experts. All are there to answer all your questions. (Industry consultants can charge $100-200/hr for consultancy; you have them there at no extra charge so make good use of them).

There will be drinks and a sausage sizzle or similar after the event so another opportunity to stay back and network.

Tickets are available now, only limited attendees so order now before sold out.

Bring your gum boots and umbrella if its wet.

As secretary of the NSWAA  l’ll be running a Yabby Farming information and education day at “Yabby Dabba Doo“, hope to see you all there. 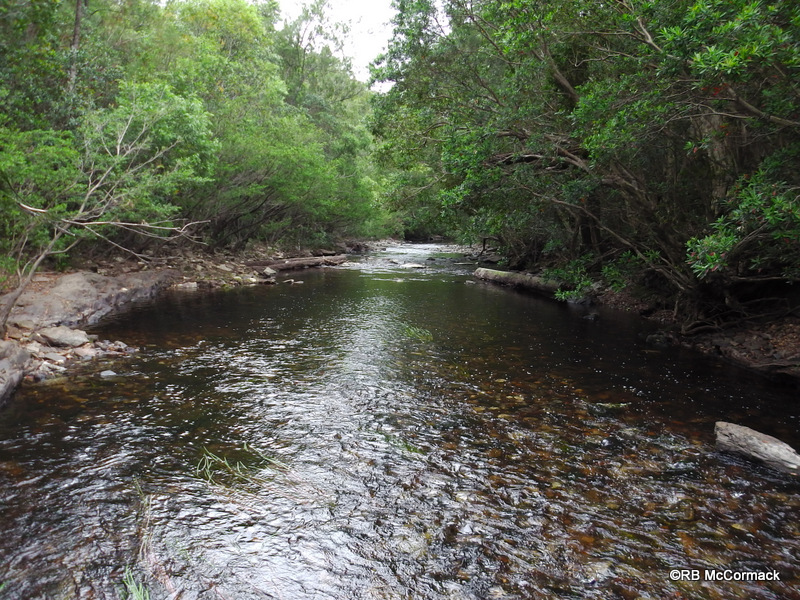 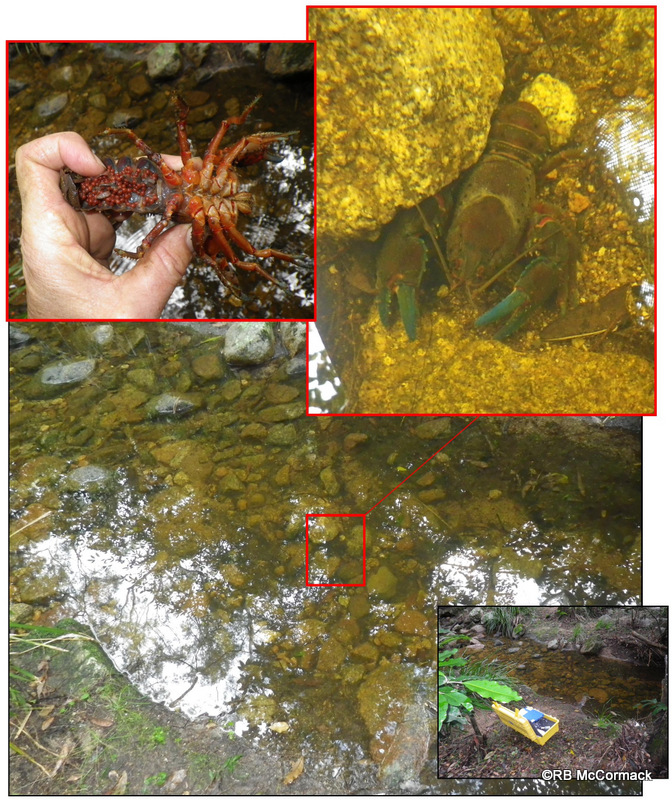