Spiny crayfish from the Euastacus genus are an inconspicuous casualty of the widespread and enduring bushfires that profoundly impacted Australia over 2019–20. As with other freshwater animals, spiny crayfish were not only directly impacted as the bushfires swept over the landscape but also following subsequent rainfall and runoff that has delivered ash and sediment into waterways from burnt areas. These impacts may continue to impact these species for months and even years and threaten ongoing survival.

Over the next 12 months (2020-2021) we will be researching the impacts of the recent devastating 2019-2020 bushfires on Australia’s Euastacus crayfish. The project is sponsored by the Federal Government under the Wildlife and Habitat Bushfire Recovery Program.

This collaborative project will inform the conservation of all 22 priority Euastacus species impacted by the bushfires. Key objectives are to:

The project will comprehensively, efficiently and consistently determine the best way forward to conserve each species.

This is a collaborative project involving: 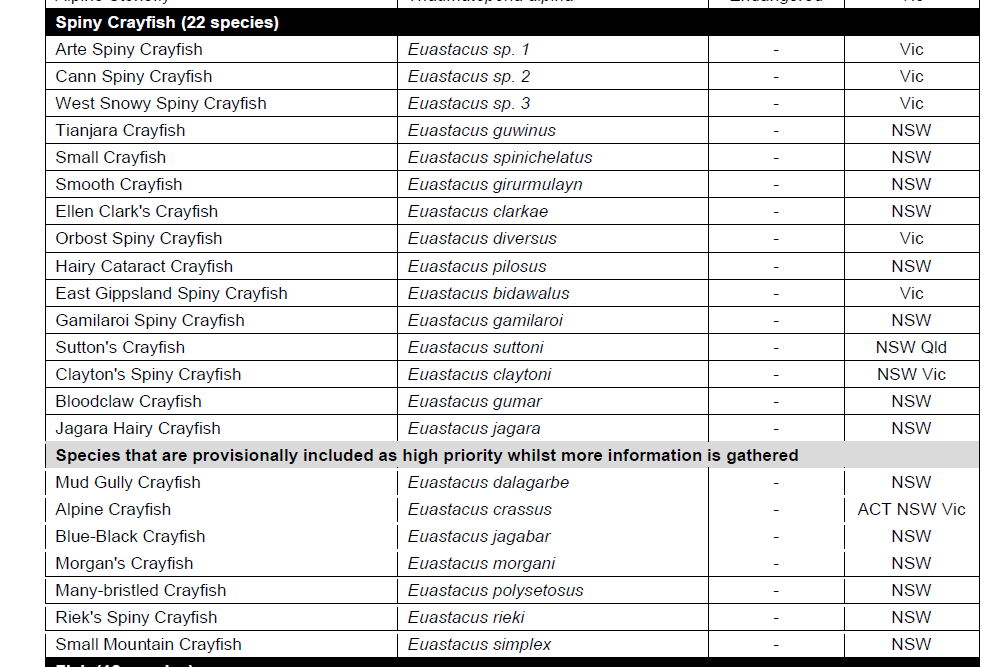 Principal investigator Dr Nick Whiterod from Aquasave-Nature Glenelg Trust said “the project represents the most significant investment in the conservation of the these spiny crayfish species, and is critically required”. “These bushfire-impacted species were already highly threatened prior to the bushfires and there is now concern that they have been pushed closer to extinction”.

Mr Robert B McCormack from Australian Aquatic Biological P/L is the team leader and main field researcher for this project conducting most of the field surveys for the majority of species listed above.

Field surveys have commenced in northern NSW and there is a continuing theme as we investigate stream after stream. Little or no water, it’s still a green drought, just enough rain to keep the grass green, but not enough for good runnoff.

The first species we investigated was the mud gully crayfish Euastacus dalagarbe from creeks in the Border Ranges National Park, northern NSW.

We also invested Euastacus jagabar whilst in the general area. With both these species we had originally conducted research on them back in 2006 to 2010 and alarmingly today, the populations seem to have reduced by 30-50% of what they used to be. That’s an alarming decline in such a short time period.

The next species we looked at was Euastacus girurmulayn from the Nightcap National Park area.

Its September 2020 now and we are currently researching Euastacus gumar. Lack of water in the streams is seriously impacting this species.

For Euastacus gumar, the breeding season is over and surprisingly many adult females have bred this year despite the dry conditions. Some of the mature females we found had not bred and some only had just a few eggs left. This gravid female from Mallanganee National Park has a health batch of eggs. These eggs will hatch by Xmas, however, unless we have substantial rain between now and then, those new juveniles will have no future. The creek is completely dry at the moment and summer is just starting, for this new generation of juveniles to have any chance of survival the creek needs to be flowing. That looks very doubtful at the moment, we expect that there will be no recruitment whatsoever this year in this creek and many just like it throughout the species distribution area.

On the short term the loss of a generation is not a serious problem, as these are long lived animals that have another 20 years of breeding ahead of them. Lets all hope that conditions return to normal soon otherwise this species in another 20 years will just be a memory.